This morning I’m sitting with organic carrot and apple juice!!! YUM!!!! The colour is what gets me! As if the juice itself wasn’t full enough of goodness on its own, I think the VIBRANCY radiating from this glass is streaming in some sacral chakra cleansing too!!!

Just a few of moments ago I thought I may have lost the juicer too, it was looking like it could have been ‘all over red rover’ with a chopping board full of fruit! An incorrectly seated mechanism made a hell of a noise, created a bit of smoke and spat bits of plastic at me… not pretty! But we’re good now! Back in business! PHEW!!

So my kitchen has recently had a major update in the appliance department! That may not necessarily be in keeping with my angle of self-sufficiency seeing as they really do need a good power supply to run, but hey, in the mean time they are super handy, super fun, give me a lot more ways to get creative, and they look good too!!! 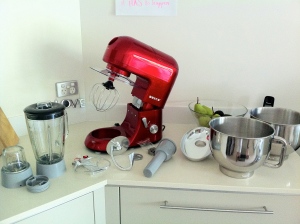 Unsure of how to tackle it first I went with what I knew… the blender! Now I have a blender and I bought it not too long ago. It’s a bit loud, chops a bit chunky, but its got a cool blue light and it does the job!! And as hard as it was for me to choose it at the time, deciding right now to gift it to my best mate was the easiest decision I could make! This new blender gets my soup to soupy!! If I stop it early I can still have my ‘real veg chunks’, or if I keep it purring I get thick golden liquid!! (I made raw pumpkin soup last week to try!!!)

Next shot was the mixer! I decided to make banana bread (with homemade caramel sauce! Drool!!!!!) Admittedly I felt a bit like I was cheating just putting ingredients in a bowl, turning it on and then gradually adding everything else until I got to fold in the smashed bananas and put it in the loaf tin, but I don’t think I’m too worried about it! I think I would happily cheat like that again!!! The one disagreement that has taken place was when it came to making pizza dough! I guess when it comes to any bread. I realise there’s a dough hook attachment, but there’s something cathartic about kneading bread! My man didn’t see the sense in an appliance that is supposed to “do it all”, if you had to do anything yourself!! (Pizzas tasted good all the same!!!)

I haven’t tried the mincing, pasta making bit out yet but I did give the mini blender a go at grinding up pesto for me. I put in a bunch of my fresh basil leaves, some cashews, olive oil, garlic, and salt. It was fairly chunky and took a good few turns with a spoon to coat through my zucchini ‘spaghetti’ but it did an alright job! (It was much quieter than the mortar and pestle, but I wont be getting rid of that in a hurry!) I’m impressed anyway!

Now as for the JUICER that I started with this morning…. this is my newest acquisition!! I drove to Animal Welfare last week, (Animal Welfare is a fantastic charity store that we have here, and I can generally always find something amazing, incredibly cheap!) and was feeling lucky! I was looking around, keeping my eyes peeled, found some great cookbooks and a cookbook stand, and then in the electrical area my little heart nearly leaped out of my chest! 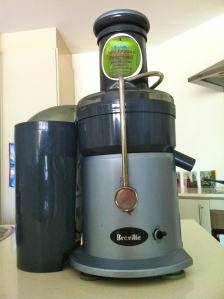 A Breville juicer, still with the stickers on the tube, with a safety tag on the electrical cord (it had been tested two days prior!) and a hand written price tag reading $7.00…….WOOHOOOO!!!!!!!!

So I’m currently in the midst of a brand new love affair. The flames of which were fanned yesterday when I did my produce shopping and took a bag solely for ‘juicing fruit’! I LOVE that the local organic produce stores have cheap boxes of “seconds” for juicing! I bought nearly a kilo each of organic apples, oranges and carrots, for just over $10! YAY!!!!

Now I’m not about to go and throw out my fantastic little juice-boat squeezer! But I could never quite get an carrot around him the way my new juicer does! HAHA!

And now that I have my own juicer I can also let you know about all of the wonderful things we can do with juice and pulp, and leftovers….. oh the possibilities!! 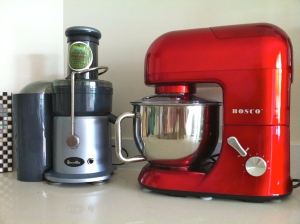