I think you can tell a lot about a person by the contents of their fridge. I guess that also depends on whether they’ve done the shopping recently or not, but nevertheless when I am in someones home I have a compulsive tendency (and a sometimes insatiable urge) to open and peruse the contents of their food life!!

So on my recent trip to England, and after becoming sufficiently acquainted with my boyfriends beautiful family (which didn’t take very long!!!) I was grateful to be delving into a new world of deliciousness!

I love that there seems to be common staples throughout many kitchens, yet all with regional variations.

Mustards, jams, sauces… there’s something about condiments that just grabs me. They’re like beautiful garments and accessories that give life to the body, to the wonderfully versatile produce that can be found the world over. They lift, enliven, enrobe and can ultimately ‘make’ a dish. And likewise they are just as personal. What is in one fridge and spread with joy may not warrant a second glance from another, what is thoughtful “to try” may by one be demolished and by another left to grow in its own neglected solitude at the back of the shelf!

In the case of this (newly adopted) fridge, my eyes grow wide at the sight of a local raspberry and lime conserve (which is heavenly on toast!); as I peer further into the back I spot a berry infused mustard which is deep bruised pink in colour and gets the mouth watering with its smell; my heart warms to the tinkering of glass milk bottles with foil tops as the fridge door breaks open and swings shut; I love that there is a shelf dedicated to wine bottles (which gradually disappear throughout the course of our stay!), and as I poke around respectfully, noticing how many similarities can be found in my own fridge (and my mum’s) my hand lands on a previously untasted, untested, and unfamiliar combination of ingredients….. Rhubarb and Ginger Jam.

This is one of those moments that has me slicing bread and dropping it carelessly into the toaster as I do the unfamiliar kitchen cupboard search for plates and cutlery!

Rhubarb and ginger jam…. I have never really eaten rhubarb, except for in the odd rhubarb and apple crumble, however this has been a rare occurrence culinarily speaking. And ginger, well, I like it, and I’ve eaten it in curries, in cookies, in tea, in stir-frys and salads, but not generally in a jam….

To cut my long winded, poetic waxing of this exceptionally tasty, tongue tingly, tantalisingly terrific topping short, rhubarb and ginger jam takes humble toast and transforms it into breakfast!! (or brunch, or afternoon tea, or a snack for those, “gosh I’m hungry and I don’t know what to eat and I can’t be bothered preparing anything elaborate and it’s getting close to meal time” moments!!) In a phrase: I’M HOOKED!!!

So it was only natural that I visited each of the local farm markets to hunt down this complimentary concoction; and likewise was my disappointment at not finding a single jar!!

Back in Australia, visiting Sydney and the family, and perusing the local organic markets I chance upon an organic bunch of rhubarb for $5. Ooooohhhhh….. that gets me thinking….. How hard can it be!?!?!?!?!?!

A Google search and a quick visit to the shops later, I find myself in the kitchen surrounded by delicious potential; organic rhubarb, organic ginger, organic raw sugar, vanilla, lemon, and a prayer.

I decided to try this 2 ways. A small experiment in jam making wouldn’t be complete without some kind of comparison. Since I’ve never attempted my own conserve/ preserve/ condiment anything before I thought it clever to perhaps have a back up in the case that one style turned out to be desperately dismal!

This method seemed initially as though it would yield superior results (flavour) due to the added time allowed for the ingredients to mix and mingle, and may be a time saving alternative for busy cooks.

I cut up the rhubarb into 2cm pieces, placed in it a ceramic bowl with an equal weight of sugar, and added some fresh lemon zest and lemon juice. [I was supposed to add the ginger at this step too however misreading my instructions I left this out until 3/4 of the way through my soaking when I realised and added it in!!] 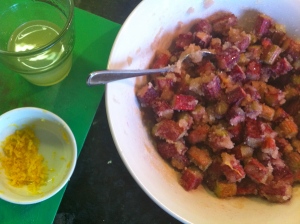 The bowl was then covered with cling film and left to marinate for 2+ hours. (Mine was there for perhaps 4hours as I went out for lunch, shopping etc. One recipe advised to leave it overnight, another 2 hours so I think it’s safe to say that it will be ready when you are ready!)

The sugar draws some of the juices from the rhubarb and the result is a bowl of sugary syrup with floating rhubarb chunks! Looks yummy!!

Once the rhubarb is sufficiently sweet the ingredients are moved into a heavy based saucepan (or jam pot) and brought to a simmer. The mixture is then boiled (slowly bubbling a bit like a witches pot!!) for 10-15minutes as the sugar dissolves and the rhubarb breaks down. If a scum forms on the surface of the mixture just skim it off with a spoon and discard.

Once the jam has reached the point of ‘gelling’ the heat can be turned off. Leave it to sit for a few minutes before pouring it into sterilised, heated jars.

**The best way to check if the jam is ready is by placing a small amount onto a chilled plate, leave for a minute or two and then drag your finger through the dollop of jam. If the two sides remain separate the jam is ready, if they cascade in towards each other like a sloppy jelly then return to the heat for a few more minutes before checking again!! 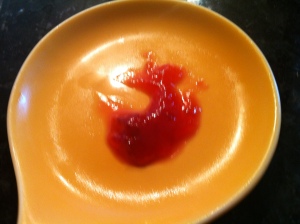 JAM #2 : The chuck it in a pot and turn up the heat method 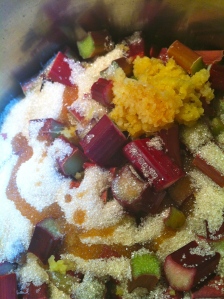 This method is pretty straight forward. Cut up the rhubarb, put it in the saucepan, add sugar, ginger and vanilla, turn on the heat and bring to a simmer. Cook over medium heat for about 20-25minutes, skimming off any scum that forms until the mixture is ready. Test using a chilled plate as mentioned previously.

Turn off the heat, leave the jam to sit for a few minutes before pouring into heated, sterilised jam jars. Voila!!!

Jam # 1 (below LEFT) is delicious…. initially the lemon was quite overpowering and the ginger was possibly a little too prominent. A few days in the fridge and the lemon has softened quite dramatically, the ginger has come to play a starring role without completely overshadowing the subtle sweet-tart of the rhubarb. Given that this batch was ‘soaked’ before cooking it has much more of a jam consistency, is very spreadable and would be great for kids given that there is the ‘jelly-like’ parts throughout the fruit bits!! This jam is the sweeter of the two (I used equal parts sugar and rhubarb) but this is balanced well by the lemon. It is not too sweet, nor is it sickly like some overly-sweet spreads!

This jam is wonderful on toast, has a beautiful vibrant colour, and a pungent and fruity ginger beer smell. It would also potentially pair well with cheeses and the consistency means it could be used in place of a quince paste or other similar condiment…. mmmm. 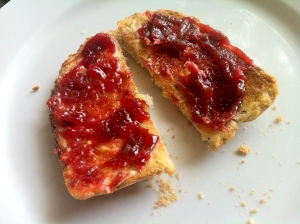 Jam # 2 (above RIGHT)…. WOW!!! This is possibly one of the nicest jams I have EVER tasted. That’s a big call coming from me!! I was quite surprised when it was initially bottled and I asked my sister what she thought, the first thing she said she could taste was vanilla (I used the tiniest amount and I couldn’t really taste it, certainly not as a stand out flavour!). Giving this jam a few days in the fridge has been like ageing a good wine. Spectacular! This batch packs a totally different punch. The previous batch is zingy and upbeat while this one is more grounded, earthy and intriguing. The rhubarb features more prominently in all aspects, the smell, the flavour and the consistency, the signature stringiness of the pink, red flesh provides great structure! The flavour is also more grown up, the vanilla is now almost a subtle top note while the ginger lingers in the background, gently warming and tingling the mouth before imparting its own signature flavour as it passes over the tongue.

This jam is incredible on toast but consensus tells me it would be amazing with cheeses! I did put a spoonful of this jam on top of an over zealous ashed-goats-cheese brioche that threatened to dry and clog my throat on the way down without some serious help in the sweet lubrication department!! Much more palatable, and enjoyable. (My dad agrees on that one too!) My mum is thinking figs and cheese, my sister (although she hates to admit it) was thinking meat, turkey, which when I consider it would be a fantastic alternative to traditional cranberry. Good one!

Whichever way I look at it, I have two extremely successful and tasty new additions to the kitchen! I also have a new found appreciation (and love) for jam making and can’t wait to try some new experiments in the conserve department now that I’m more comfortable with the process! If you have any suggestions or inspirations for different flavours let me know!!!